Sister Seagull, #2, ridden by Antonio Gallardo, gets up in time to win Woodbine’s Bison City

It appeared Sister Seagull had run out of runway, but the 3-year-old daughter of Hard Spun found a way to land herself in the winner's circle at the finish of the $250,000 Bison City Stakes, Sunday at Woodbine.

Bred by Sean Fitzhenry, who co-owns with his wife Dorothy, Sister Seagull finished second to major Queen's Plate contender Moira in the Woodbine Oaks on July 24.

This time, in the second leg of the Canadian Triple Tiara Series, the Catherine Day Phillips trainee went one better.

But it wasn't easy.

Strega, under Rafael Hernandez, zipped to the lead in the 1 1/16-mile Tapeta race, with Lady Brew, Pioneer's Edge, Sister Seagull and Souper Flashy following through an opening quarter-mile split of :23.85.

The order of the five-horse field remained unchanged through a half in :48, as Strega kept her lead over Lady Brew at two lengths.

Sister Seagull, with Antonio Gallardo in the irons, continued to save ground along the inside, but had plenty of work to do to collar the leader, who was still running comfortably on the front, a length on top at the stretch call.

Gallardo and his sophomore filly began to cut into the lead in deep stretch, eventually striking front in the final strides to record a neck win over a very game Strega. Pioneer's Edge, fifth in the Woodbine Oaks, was third, 1 ¼ lengths in front of Souper Flashy.

“She's started getting better,” said Gallardo. “After putting the blinkers on, she got more focused. She improves every race. Last time [in the Woodbine Oaks], there was a more aggressive pace, and I had a little bit of traffic that day, but I think the winner [Moira] is much the best. We finished second and I'm pretty happy about that. I'm very confident today. She's honest and I like that.”

Sister Seagull is now 2-1-1 from seven starts. She broke her maiden two starts ago in a maiden special weight race on June 5.

The final race of the Canadian Triple Tiara Series, the $250,000 Wonder Where Stakes, at 1 ¼ miles on the E.P. Taylor Turf Course, is set for September 11.

Sister Seagull paid $5.40. She was bred in Ontario from the Kitten's Joy mare Sweet Kitten. 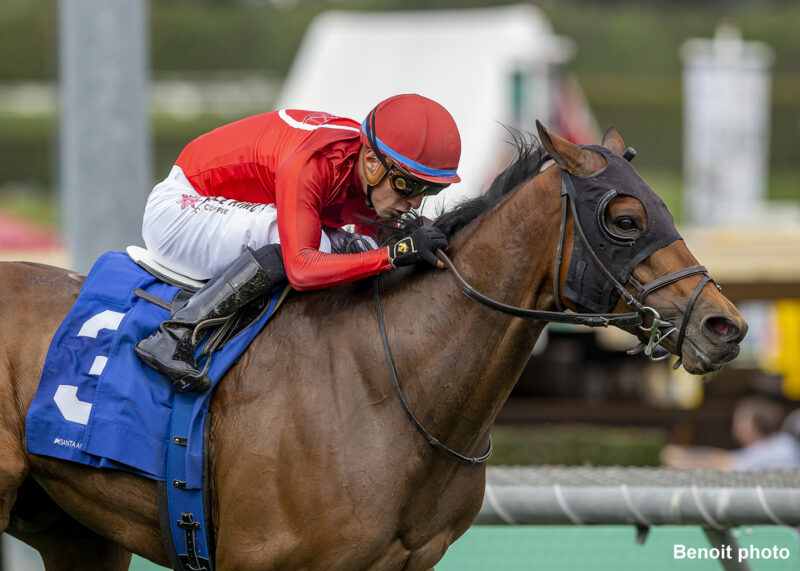