By Jenny Kellner
Going straight to the front and holding off a late charge from Nathan's H Q, Sunrise Smarty earned his first graded stakes victory Thursday afternoon in the 98th running of the Grade 3, $100,000 Fall Highweight Handicap, the traditional Thanksgiving Day feature at Aqueduct Racetrack.

Leaving from the inside post, the 4-year-old Smarty Jones colt was committed to the lead by jockey Ramon Dominguez and zipped through an opening quarter-mile in 21.51 seconds and a half 44.31. Still in front as the field turned for home, Sunrise Smarty found another gear at the eighth pole and crossed the wire a half-length in front.

Shouldering 130 pounds, one less than the runner-up, Sunrise Smarty completed the six furlongs in 1:09.97 as he gave Dominguez, who was celebrating his 35th birthday, his fourth of five winners for the day.

“Being on the inside, I was committed to go the lead,” said Dominguez. “After a few strides, I wasn't too happy with the pace scenario we were facing. I let him open up a length or two, and, despite how fast we were going, he was able to relax. At the eighth pole, it looked like they were going to pass him, but he kept on finding.”

The leading jockey on The New York Racing Association, Inc. (NYRA) circuit this year and the reigning Eclipse Award winner as the nation's top rider, Dominguez started by winning race 2 aboard Terminus ($6.10) and next took race 5, the Capades overnight stakes, aboard Marion Ravenwood ($4). He then swept the late Pick 3 ($33.60) with Alcomatch ($4.30) in race 7, Sunrise Smarty in the Fall Highweight, and Thisskysabeauty ($3.70) in race 9, giving Andrew Lakeman, the former jockey who is confined to a wheelchair, his first winner as a trainer.

“It's a dream come true,” said Lakeman, who became a trainer after being injured in a spill in 2007. “It's great to have my first winner and I'm so happy and grateful for everybody who helped me.”

“He's a real soldier. He shows up,” said Hushion. “The inside post didn't give us any choice but to send him today. I was worried after that first quarter-mile, which was a bit salty, and again at the eighth pole, when it looked like they had him in their sights and were going to run him down. But he's a tough horse. He'll race here over the winter, but I don't have anything in particular picked out.”

Nathan's H Q was 1 ½ lengths clear of Flat Bold, with Escrow Kid finishing fourth, another 5 ¾ lengths back. Favored General Maximus broke down on the far turn and was euthanized. Caixa Eletronica, Driven by Success, Calibrachoa, Frazil, and Parent's Honor were scratched. 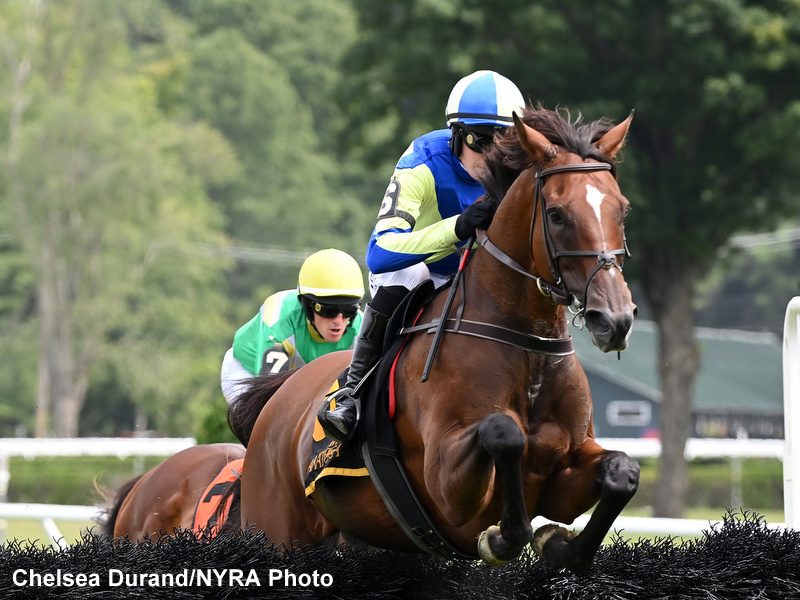