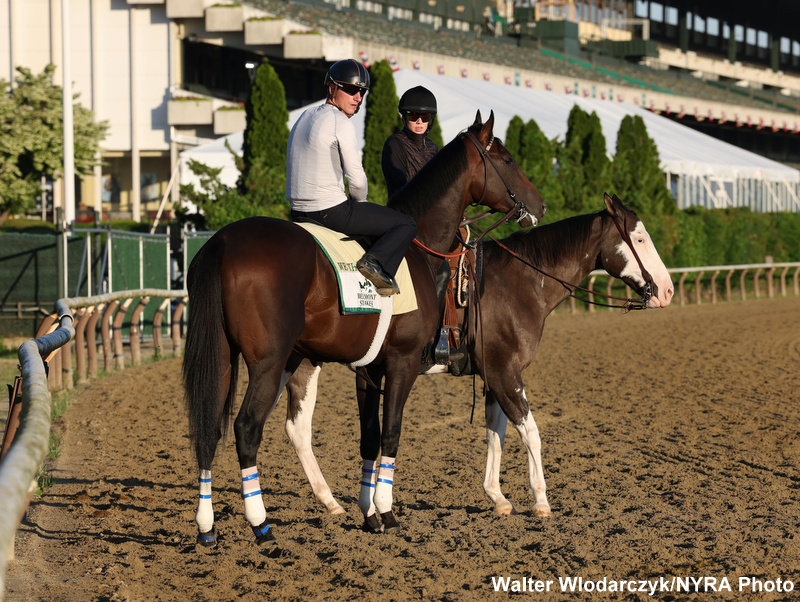 We the People at Belmont Park

In three of his five starts dating back to his debut in February, We the People was more than good. He not only won the three races, but the combined winning margin was 21 lengths.

We the People is one of seven 3-year-olds entered in Saturday's $500,000, Grade 3 West Virginia Derby Aug. 6 at Mountaineer Casino, Racetrack & Resort and is listed as the 2-1 favorite in the morning line in what appears on paper to be a contentious event.

The colt by Constitution made his first two starts in Arkansas at Oaklawn Park where he broke his maiden by 5 3/4 lengths at one mile and followed up with a five-length score in a 1 1/16-mile allowance race. In May at Belmont Park, he led all the way in the one-turn G3 Peter Pan Stakes at the West Virginia Derby distance of 1 1/8 miles and gradually drew away to a 10 ¼-length victory.

His only losses came in two Grade 1 stakes—the 1 1/8-mile Arkansas Derby and the 1 1/2-mile Belmont Stakes, in which he finished fourth after leading for roughly 1 ¼ miles. The second-place finisher in the Belmont, the filly Nest, was second in the G1 Kentucky Oaks and after the Belmont captured the G1 Coaching Club American Oaks at Saratoga Race Course.

Trained by Rodolphe Brisset, We the People is owned by WinStar Farm, CMNWLTH and Siena Farm. WinStar in Central Kentucky stands his sire and has a private training center where We the People has registered four workouts in July heading up to the West Virginia Derby.

“He is doing very well, and his works have been good, too,” Brisset said while on his way to Mountaineer Aug. 5. “We like the timing (of the West Virginia Derby) and we're hoping for a good effort. He also has a good draw (post position 6 in a field of seven), so we just pray everything goes well.”

There are six other stakes on the Saturday program at Mountaineer that gets underway at the special first post time of 2 p.m. The $75,000 West Virginia Legislature Chairman's Cup, a popular race for local connections given its distance of 4 ½ furlongs, has attracted Storm Boarder, a 6-year-old Chilean-bred gelding who is undefeated in four starts at Mountaineer.

Claimed by trainer Kevin Patterson for owner Robert Cole Jr. for $15,000 in March 2021, Storm Boarder won seven consecutive races for his new connections off the claim before a second-place finish on the turf in Maryland in May of this year. Four of the wins during the streak came at Mountaineer at distances from 4 ½ furlongs to 5 ½ furlongs; Charle Oliveros, who was aboard for all the local victories, is named to ride.

Storm Boarder is the 3-1 second choice on the morning line behind even-money favorite Hollis, who led late and just missed by a head in last year's Chairman's Cup for owners WSS Racing and 4G Racing and trainer John Ortiz. Hollis, a 7-year-old Street Sense gelding based in Kentucky, has won 11 of 27 starts and is a multiple stakes winner.