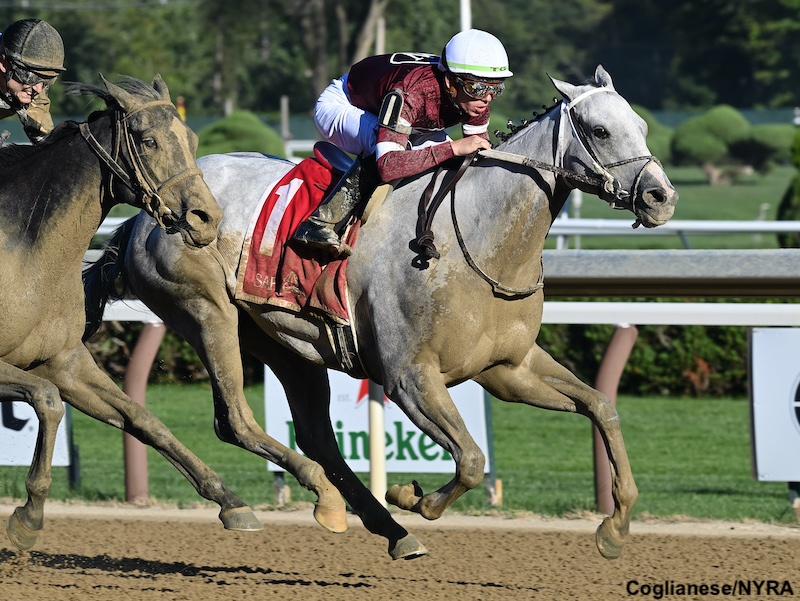 Trained by Hall of Famer Steve Asmussen and piloted by Tyler Gaffalione, the gray daughter of leading second crop sire Gun Runner captured last year's Grade 2 Adirondack at the Spa, defeating eventual graded stakes winner Interstatedaydream by 3 1/2 lengths. She entered the 75th renewal of the Prioress off Churchill Downs stakes scores in the seven-furlong Leslie's Lady on June 12 and the one-turn mile Tepin on July 2.

Breaking from post 1, Wicked Halo maintained her rail position in fifth while graded stakes winner Hot Peppers utilized her usual frontrunning tactics through an opening quarter-mile in 21.97 seconds and a half-mile in 44.99 over the fast main track with two-time winners Mischievous Diane and Union Lake tracking just to her outside.

Gaffalione continued to bide his time around the far turn in search of racing room, and swung his filly four wide at the quarter pole. Hot Peppers maintained her lead at the top of the stretch with Union Lake continuing to give her all to her outside. But Wicked Halo's late burst of energy proved superior as she fended off a late rally from 37-1 New York-bred longshot Sterling Silver to win by a neck in a final time of 1:10.16. Sterling Silver finished another 2 3/4 lengths ahead of Union Lake.

Completing the order of finish were Hot Peppers, Half Is Enough, Angitude, Mischievous Diane and Lady Scarlet. Bank On Anna and Smash Ticket were scratched.

The triumph was a collaborative fifth stakes victory of the meet for Asmussen and Winchell, who captured the Grade 1 Runhappy Travers last Saturday with Epicenter, who also won the Grade 2 Jim Dandy. Headed by Ron Winchell and managed by David Fiske, Winchell Thoroughbreds scored previous success this meet with Gunite in the Grade 2 Amsterdam as well as reigning New York-bred Champion Older Horse Bankit in the Evan Shipman.

“[For Wicked Halo] to have a nice break and come back and still be such a quality filly is very rewarding,” Asmussen said. “Last year with the Gun Runners, we tried to prove [Gun Runner as a stallion] and were extremely aggressive with them. We were rewarded for it, but Ron and David run a considerable amount of horses and just felt it was best for them [to have some time off].”

Gaffalione, who piloted the Asmussen-trained and Winchell-owned Gunite to victory in the Grade 2 Amsterdam, was full of praise for North America's all-time winningest trainer.

“All the credit goes to Steve and his team. They brought her over here ready to fire a big one,” Gaffalione said. “I was very confident coming into today's race. We were planning on going to the Test with her, but she had a little bit of a hiccup and got pushed to this, but I thought the race suited her well. There was plenty of speed for her to get a good trip and when I asked on her, she gave me everything she had.”

Asmussen noted that Wicked Halo's 2022 campaign has been something of a work in progress.

“We were a little off track early [in the year]. She's very laid back and it took her a few races to get sharp, but I think when we got back to Churchill [Downs], she dialed it up,” Asmussen said. “Her last three runs were really solid. We did plan on running in the Test, but she had a little bit of a [minor] hind foot thing. It was easy to pass knowing this was on the calendar and she made this race easily.”

Asmussen said Wicked Halo is likely to make her next start in the Grade 3, $275,000 Dogwood on September 24 at Churchill Downs.

“With her having success at seven-eighths, [against] 3-year-olds; it seems very obvious,” Asmussen said.

Returning $10.80 for a $2 win bet, Wicked Halo, out of 2015 Adirondack winner Just Wicked, upped her lifetime earnings past the half-million mark to $574,050 while bragging a consistent 9-5-0-3 record. Her lone off the board placing came when fourth in her 2022 debut in the Dixie Belle on February 19 at Oaklawn Park.

Tom Albertrani, trainer of runner-up longshot Sterling Silver, said a change of tactics made all the difference for the two-time stakes-winning daughter of Cupid.

“She ran really well today. We're really happy with the performance,” Albertrani said. “We tried to change our strategy by taking her back and making one run and it looked like it might've helped. She would like to go seven-eighths more preferably, but today, we had no choice but to go three-quarters and it worked out well. That was a good place.”

The Prioress honors the first American-born racehorse to win in England. Owned by Richard Ten Broeck, Prioress won the Great Yorkshire Stakes and the Cesare Witch Handicap in 1858. Inaugurated at Jamaica Race Course in 1948 and later run at Aqueduct and Belmont, it has been run at Saratoga since 2012. 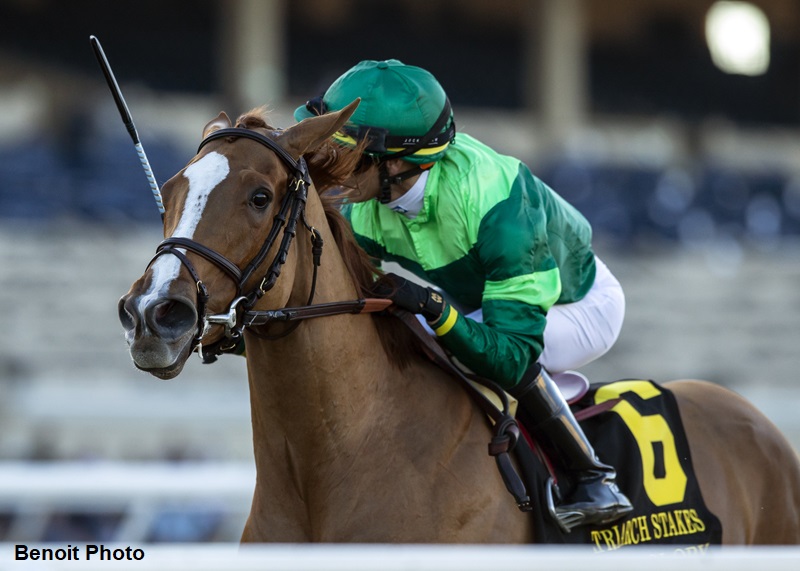 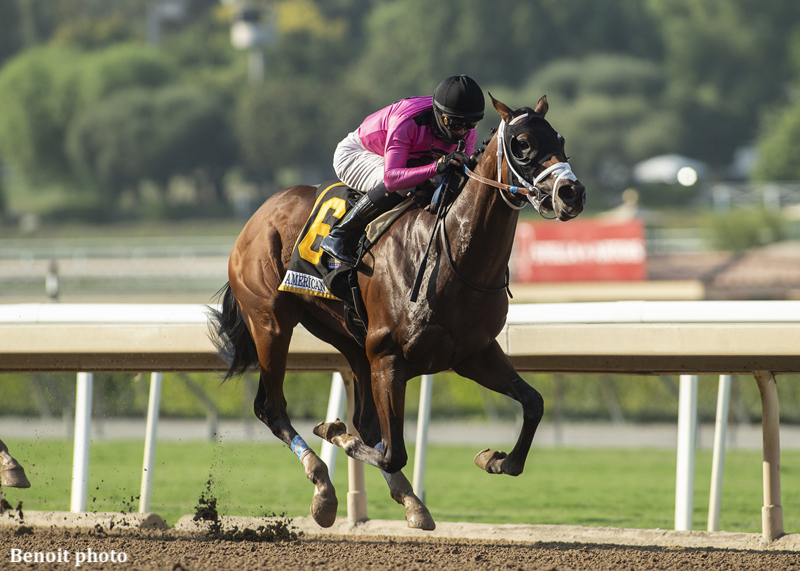