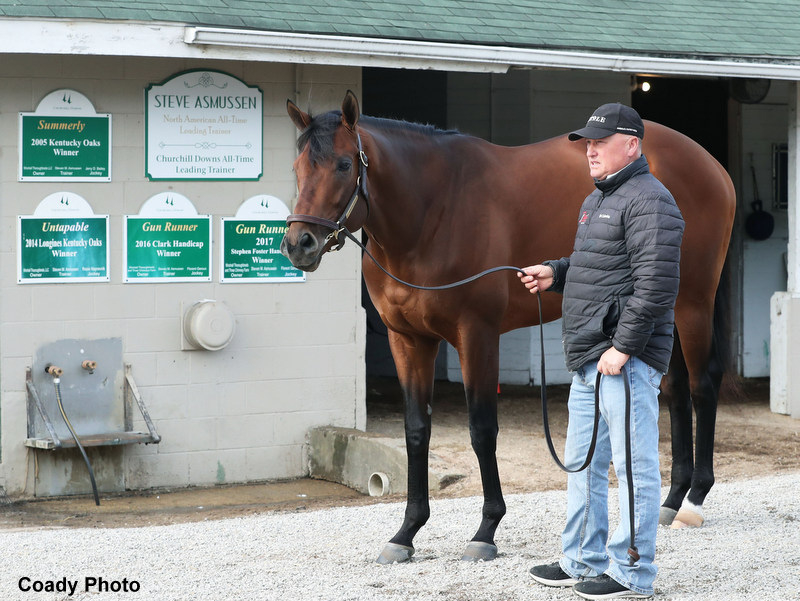 Though the 80-1 Kentucky Derby winner Rich Strike will skip the 147th running of the Preakness Stakes, this year's edition features an exciting matchup between Derby runner-up Epicenter and Kentucky Oaks winner Secret Oath. A total field of nine will line up on Saturday at Pimlico in Baltimore, Md.

Trainer Steve Asmussen will send Epicenter out of post eight, and the Not This Time colt has been installed as the 6-5 favorite for the second jewel of the Triple Crown.

Secret Oath could become the seventh filly to win the Preakness Stakes, and she was installed as the 9-2 third choice on the morning line. If she does it from post position four, she could give D. Wayne Lukas his record-tying seventh Preakness win.           Secret Oath arrived at Pimlico shortly before 3:30 p.m. Monday following a van ride from Churchill Downs. Lukas reported that the Oaks winner handled the trip well.

The second choice on the morning line at 7-2 is Early Voting for trainer Chad Brown, drawing post five. The runner-up in the G2 Wood Memorial was intentionally held out of the Kentucky Derby to target this race.

Kentucky Derby fourth-place finisher Simplification will get a new rider in John Velazquez and break from the rail. The Antonio Sano trainee won the G2 Fountain of Youth Stakes earlier this year.

The next lowest odds go to the Ken McPeek trainee Creative Minister, supplemented to this race for $150,000. He'll leave from post position two, and start at odds of 10-1 on the morning line.

Trainer Steve Asmussen [Epicenter, Post #8]: “I thought it was ideal. It's a nine-horse field, plenty of run-up to the first turn. Several fresh horses and us coming back in two weeks, I think it's absolutely ideal. You could say we're half as nervous as the draw for the Derby, when you go from 20 runners to nine. I think that makes it that much more beneficial to everybody as far as post-position draw goes. With that being said, it's exciting to run against Early Voting, me being a huge fan of Gun Runner (whom he trained). So I'm very excited to see him, but obviously anxious for Epicenter's opportunity in the Preakness.”

Trainer Chad Brown [Early Voting, Post #5]: “Terrific. I wanted to be somewhere in the middle, so that will work. I'm happy with the draw.”

Owner Rob Mitchell [Secret Oath, Post #4]: “I think it's fine. … I mean, I'm happier with that than I was after the post position for the Oaks (Post #1), but I'd really like to hear what Wayne [Lukas] has to say about it.”

Trainer Antonio Sano [Simplification, Post #1]: “I saw speed to the outside. It doesn't change our strategy. At first, I thought no good, but Johnny V [John Velazquez] is so smart. He will make the decision if he has to go outside.”

Trainer Kenny McPeek [Creative Minister, Post #2]: “I like him inside. We will leave it up to Brian (Hernandez Jr.). Really, it's not the post position as much as it is the horse. It would not have bothered me if we drew the rail.”

Trainer Tim Yakteen [Armagnac, Post #7]: “I like it. The post should suit him fine. It's a good draw for him. In any race, yes, the post is key, but it depends on the horse. He just needs to get out and get in a good rhythm.”

Trainer Saffie Joseph Jr. [Skippylongstocking, Post #9]: “It's fine. I don't think the posts are going to compromise anybody, so I'm fine with it. It's only a nine-horse field.”

Trainer Doug O'Neill [Happy Jack, Post #6]: “Six out of nine – I like it. I think it's a good draw. With the three outside us, we have some wiggle room. This is a tough group. We like that there are nine rather than 20. We are happy right where we are.”

Trainer Kevin McKathan [Fenwick, 50-1; Post #3]: “The draw was perfect. I wanted to be right in the middle. My horse is going to the front. I deserve to be 50-1 how we ran last time. I deserve to be that, maybe 60-1. He has to go to the front – we got cut off, shut off in the Blue Grass – once that happens then anything can happen. He's a free-running horse. You put him on the lead and let him go at 50-1, they might never see him again.