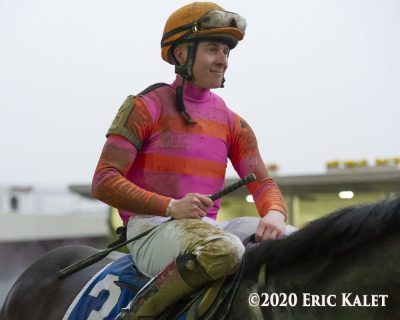 Davis, a native of Manhasset, N.Y., earned his first Grade 1 victory last October aboard Mutamakina in Woodbine's E.P. Taylor. His upward trajectory continued into the fall and winter in New York with Davis capturing his first NYRA circuit riding title at the Aqueduct Racetrack winter meet.

Trained by Hall of Famer Mark Casse, who saddled 2019 Belmont Stakes winner Sir Winston, Golden Glider arrives at the “Test of the Champion” off a runner-up finish to 2-1 morning line favorite We the People in the Grade 3 Peter Pan on May 14. Sir Winston also arrived at the Belmont Stakes from a runner-up effort in the Peter Pan.

“It feels great. I'm excited and I'm raring to go. Thanks go out to Mark Casse for letting me ride in my first Belmont,” said Davis, who guided Golden Glider in his most recent effort. “I ride for a lot of guys on the backstretch so I can't say enough about them. I'm back leading again through the Belmont meet, and this has been my best year yet in my career. I'm always trying to thrive and do better.”

Owned by Gary Barber, Manfred Conrad and Penny Conrad, Golden Glider was a close fifth down the backstretch in the Peter Pan, just 3 1/2 lengths off pacesetting We the People. Golden Glider battled gamely to the inside of two others for second in a three-horse photo for place honors.

“I'm really high on my horse,” Davis said. “He's a stalker. When I rode him in the Peter Pan, what I liked about him was that when he was able to switch off. I think that's the key to getting the distance with him, is being able to switch off.”

Davis said Golden Glider is likely to be prominent.

“It looks like he's going to be somewhat forwardly-placed and then we'll take it from there. He's going to run his 'A' game. He's been training well and everything,” Davis said. “I'm just trying to ride a nice, steady, honest race. I don't want to get too crazy early, but at the same time I want to get some position. I really think he'll be there for me down the lane.”

While Davis was not aboard Sir Winston in his Belmont coup, he did pilot the horse to an allowance triumph the following winter at Aqueduct.

“I loved that race. He was great to ride,” Davis said. “He came with an explosive run. He was maybe next-to-last and came with a strong kick. Man, it was nice to have a horse like that underneath me. It's just Mark giving me the trust to ride horses like that. I read where Mark said he will have a similar style to Sir Winston when he won. He was fairly close up in the Belmont.”

“The Peter Pan was run over a good and sealed track and that day the speed was holding, so it was tough to close,” Davis said. “I feel like right now, Golden Glider is more of a steady-paced horse. Maybe Sir Winston has a stronger closing kick. The biggest similarity is that they'll always give you a kick down the lane.”

Davis is no stranger to riding winners for the Casse barn, having piloted New York-bred filly Make Mischief to victory in the Critical Eye Handicap last month.

He credited both Casse as well as his New York-based assistant Shane Tripp for being instrumental to his success.

“Shane is a great guy. He gives me free rein when I ride. He'll say, 'You got a plan? OK, sounds good. Go execute,'” Davis said. “It just gives me a lot of confidence to know that I'm in control out there and I can do what I think is right for the moment. A guy like Mark Casse is giving me opportunities and I'm just trying to do the best I can.”

“Christophe Clement really took to me into the fall last year, giving me my first Grade 1 and plenty of winners through Belmont,” Davis said. “He really gave me the momentum I needed through the winter and helped me win my first riding title.”

With the Belmont Stakes taking place at his home track, Davis knows he'll have plenty of support on Saturday.

“I got a lot of people rooting for me and it feels great that I'm in my hometown riding in the biggest race on this track,” Davis said.