Hall of Fame trainer Todd Pletcher sent a number of his stars to breeze over the dirt training track Friday in preparation for engagements at the Belmont Stakes Racing Festival, including Mo Donegal for the Grade 1, $1.5 million Belmont Stakes presented by NYRA Bets.

The three-day Belmont Stakes Racing Festival, which runs from Thursday, June 9 through Saturday, June 11, will encompass 17 total stakes, including eight Grade 1s on Belmont Stakes Day, capped by the “Test of the Champion” for 3-year-olds in the 1 1/2-mile final leg of the Triple Crown.

In addition to the 154th running of the Belmont Stakes presented by NYRA Bets on June 11, that day's card will include three Breeders' Cup “Win and You're In” qualifiers: the one-mile Grade 1, $1 million Hill 'n' Dale Metropolitan Handicap for 3-year-olds and up [Dirt Mile]; the Grade 1, $500,000 Ogden Phipps for older fillies and mares 4-years-old and up going 1 1/16 miles on the main track [Distaff]; and the Grade 1, $400,000 Jaipur for 3-year-olds and up going six furlongs on turf [Turf Sprint].

Tickets for the 2022 Belmont Stakes Racing Festival are available at https://www.belmontstakes.com/tickets/.

The late-running Uncle Mo colt was away slow from the inside post last out in the Grade 1 Kentucky Derby, rallying from 17 lengths off the pace to finish fifth, defeated 3 3/4-lengths by upset winner Rich Strike.

Mo Donegal breezed a half-mile in 50.02 Friday in company with Grade 1 Ashland winner Nest, who is possible to take on the boys in the Grade 1 Belmont Stakes.

“It was a good maintenance breeze,” said Pletcher's New York-based assistant Byron Hughes. “They both were moving well and galloped out well. They were on even terms throughout and we were happy with the breeze.”

Owned by Repole Stable, Eclipse Thoroughbred Partners and Michael House, Nest captured the Grade 2 Demoiselle in December at the Big A to launch a win streak that included scores in the Suncoast in February at Tampa Bay Downs ahead of her 8 1/4-length coup in the Ashland at Keeneland. The Curlin filly closed to complete the exacta last out in the Grade 1 Kentucky Oaks, finishing two lengths back of Secret Oath.

“Both are good breeze horses and made a good matchup,” Hughes said. “They went head-and-head throughout in 1:01 and change and had a good, solid gallop out.”

Malathaat, a regally-bred daughter of Curlin out of the Grade 1-winning A.P. Indy mare Dreaming of Julia, captured the Grade 1 Ashland at Keeneland and the Grade 1 Kentucky Oaks at Churchill Downs last year in a memorable sophomore campaign completed by a close third in the Grade 1 Breeders' Cup Distaff in November at Del Mar.

The talented bay posted a three-quarter length score in the Grade 3 Doubledogdare in April at Keeneland in her seasonal debut and is set to lead a talented field of older fillies and mares in the 1 1/16-mile Ogden Phipps expected to include Letruska, the reigning Champion Older Dirt Female.

Wit, by Practical Joke, made two graded starts last summer at Saratoga, romping to an eight-length score in the Grade 3 Sanford in July ahead of a troubled runner-up effort to Gunite in the Grade 1 Hopeful in September. The dark bay colt completed his juvenile campaign with a third-place finish in the Grade 1 Champagne in October at Belmont and recently won his seasonal debut, taking the seven-furlong Grade 3 Bay Shore by a nose on April 9 at Aqueduct.

“The Bay Shore was a big effort from him. He really dug in there and we were happy with that effort,” Hughes said. “He bounced out of it in really good form and has put in some really solid works. We're really happy with where he is right now.”

“It was a maintenance half-mile and both were moving well,” Hughes said. “They both gave us everything we wanted to see from them.”

“He's a big, scopey horse and acts like he would run all day, so I would imagine the distance would not be an issue for him based on what we've been seeing,” Hughes said.

First Constitution, a 5-year-old Chilean-bred son of Constitution, captured his first stateside win in January at the Big A, romping to a 6 3/4-length score in the nine-furlong Jazil. He followed with a third-place finish in the Excelsior in April at Aqueduct ahead of a four-length score over Portos last out in the 11-furlong Flat Out on May 6 at Belmont.

CHC Inc. and WinStar Farm's Americanrevolution has breezed twice over the Belmont dirt training track in preparation for his seasonal debut, including a five-eighths breeze in 1:01.02 on May 16.

“He's doing really well. He came in from WinStar in great shape and has had a couple breezes here now,” Hughes said. “He continues to impress us and we're happy with where he is off the layoff.”

The New York-bred Constitution colt defeated open company in the Grade 1 Cigar Mile Handicap presented by NYRA Bets last out in December at the Big A to cap a season that included scores against fellow state-breds in the New York Derby at Finger Lakes, the Albany at Saratoga and the Empire Classic at Belmont.

The $275,000 Fasig-Tipton Saratoga Preferred New York-bred Yearling Sale purchase is targeting the $200,000 Commentator, a one-turn mile for 3-year-olds and up on the May 30 Big Apple Showcase Day card at Belmont. 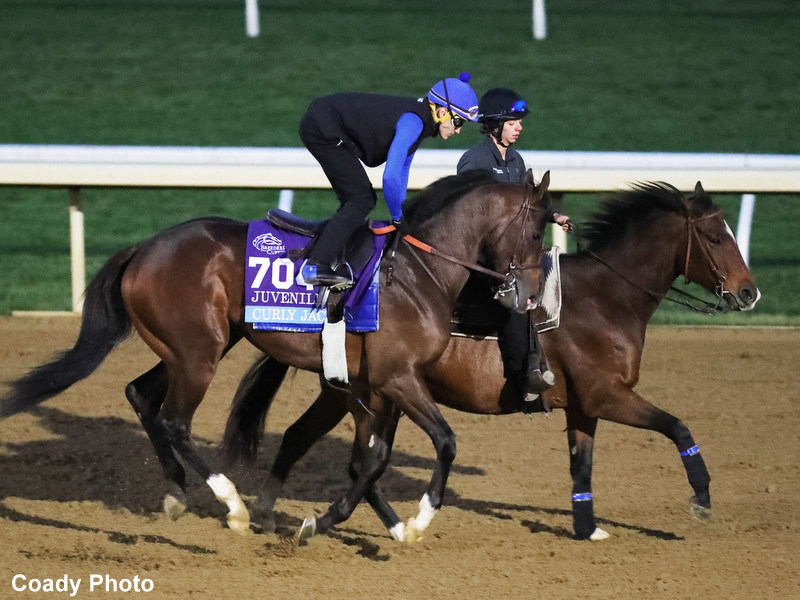