Kentucky Derby winner Rich Strike will break from the fourth stall in Saturday's's Grade 1, $1.5 million Belmont Stakes and was assigned morning line odds of 7-2. We The People, breaking from the rail, is the morning line favorite at 2-1 in the stamina-testing 1 1/2-mile classic run at Belmont Park in Elmont, N.Y.

Belmont Park's apex affair was inaugurated in 1867 with filly Ruthless capturing its first running. Throughout the past century-and-a-half, 38 horses have captured the “Test of the Champion” en route to Hall of Fame induction, including 13 Triple Crown winners.

Fan favorite Rich Strike, who won the Derby at odds of 80-1,  has been the focus of media coverage at Belmont Park throughout recent days, as he has stretched his legs in trademark long gallops since his arrival in New York on June 1.

Trainer Eric Reed gave a brief interview with NYRA television analyst Andy Serling just after the draw and discussed race strategy. Reed acknowledged there is considerably less pace in the Belmont than there was in the Kentucky Derby, but does not expect that to be a major problem for the deep-closing chestnut.

“He's still probably going to drop back; that's just his style of running,” said Reed on Tuesday morning. “I don't think he'll drop back nearly as far [as the Derby] and I think turning for home if he's close enough he'll have a real good shot at it. It's definitely not a race where you want to come from way, way back. We've tried a couple times to get him going early and it didn't work. Unless he changes his strategy, he's going to have to try to run the same kind of race.”

Favored We The People will come to the race after a win in the Grade 3 Peter Pan and the rail position will give rider Flavien Prat options.

“He doesn't have to [go to the front]” said trainer Rodolphe Brisset when asked by Serling about strategy. “But we've got to play the break and go from there. That's not my job. Flavien knows what to do.”

Brisset says based on the gallop out following the Peter Pan, he feels good about his horse's chances over a longer distance.

Morning line favorite, We the People drew PP 1 for the #BelmontStakes! Hear what trainer @BrissetRodolphe has to say post draw… pic.twitter.com/Fl60YAeCxj

Rodolphe Brisset, trainer of We the People (post 1, 2-1): “[The post] is one thing we can't control, so it is what it is. He doesn't need to lead. On paper, it looks like he could be on the lead. We got the one hole, but there's nothing I can do about it. I'm sure Flavien [Prat] will do what he has to do.”

On We the People's favoritism: “I mean, he's 3-for-4 and ran a 103 Beyer. He's won by [over] twelve lengths and he's been training here. I was actually debating it with [WinStar CEO] Elliot Walden. He told me he'd be the favorite and I told him we'd be second-choice. The linemaker has been watching him.”

Todd Pletcher, trainer of Mo Donegal (post 6, 5-2) and Nest (post 3, 8-1): “They've both trained super. We came in right after the Derby was over. Both have trained here and breezed together all three times and I'm really excited about the way they're coming into it and the way they came out of their last breezes.”

On Mo Donegal: “He's the horse that definitely from the very beginning was showing us that he wanted to run longer. I thought he ran a very credible race in the Derby; he was still closing at the end. We dropped back and we were nineteenth going into the first turn. We wound up having to go a little wide. What I liked is he kept running to the wire and kept finding more. I think he can [sit closer] and I think he will need to do that. This race doesn't appear to have much pace on paper, so if they go 49, then he needs to be a little closer to have a shot.”

On Nest: “The nominations closed for the Triple Crown in January. We didn't necessarily nominate her with the Derby in mind, but we did nominate her for the Belmont as a possibility. She's a filly who's really well-bred for this race. I think she has the right kind of disposition for it and she's giving every indication that she's doing well. Everything has gone perfectly since the Oaks. We feel like we're giving her a shot at a huge opportunity.”

Mike Repole, co-owner of Mo Donegal and Nest: “When there's an eight-horse field, there really isn't a bad post. It's not the Derby where we drew the one hole against a field of 20. Mo Donegal did so much out of the one post, getting an actually decent post is only going to help him. “

Eric Reed, trainer of Rich Strike (post 4, 7-2): “It's fine. It's an eight-horse field. I really didn't want the inside with him, so I'm fine with the four [post]. I'm unsure of how he'll want to run because he's so much more aggressive than he's been before. I'm just going to tell Sonny [Leon] to stay out of his way. I just don't know that he's going to be that far back just by the way he's training, let alone the pace of the race. I wouldn't be surprised to see him real close to the pace if the horse chooses to do it. If the horse comes out of there running, we're not going to get in his way.”

Kenny McPeek, trainer of Creative Minister (post 5, 6-1): “The post is fine. It's a good, solid spot for him. He can stalk off the pace if he needs to. He'll go inside if you want him to. It's not a big field. When we won it with Sarava, he was in the 12 hole.”

On what it would mean to win another Belmont Stakes: “This is a race that is going to take a horse with a huge amount of stamina, and that's why it's the 'Test of the Champion.' It would be great [to win again]. We always enjoy being a part of these types of races. I've also had some horses who have run well in it – Atigun was third a few years back [2012]. We're always trying to find these kinds of horses and it's going to be great fun.”

John Ortiz, trainer of Barber Road (post 8, 10-1): “I love where we drew on the far outside. We have plenty of stretch to get settled in early in the race. Hopefully, we can get into the right position going into the first turn.

“I'm beyond thankful to be participating in the Belmont Stakes. It's a race I've loved and looked forward to since I was a kid. I grew up in Elmont, New York, so it's a hometown race for me.”

On jockey Joel Rosario: “We're giving our horse the best shot he can possibly take here with Joel, who is a very experienced local rider. He's a great match for this horse and this race.”

Mark Casse, trainer of Golden Glider (post 7, 20-1): “I love the post. I'd rather not be down inside, so being in that post is an advantage because Dylan [Davis] can do whatever he wants to do. I'd like to get a trip similar to Sir Winston – and with similar results.”

Saffie Joseph, Jr., trainer of Skippylongstocking (post 2, 20-1): “It's a fine post. We're going a mile and a half so the post isn't going to be a problem for anyone. He won at Gulfstream from the one-hole. You want to save some ground on those big sweeping turns at Belmont and from there he hopefully runs the race of his life. He's a notch below them on numbers but this is a horse race and anything can happen. We hope he can get the mile and a half and that the distance helps, but until they do it you don't know for sure.” 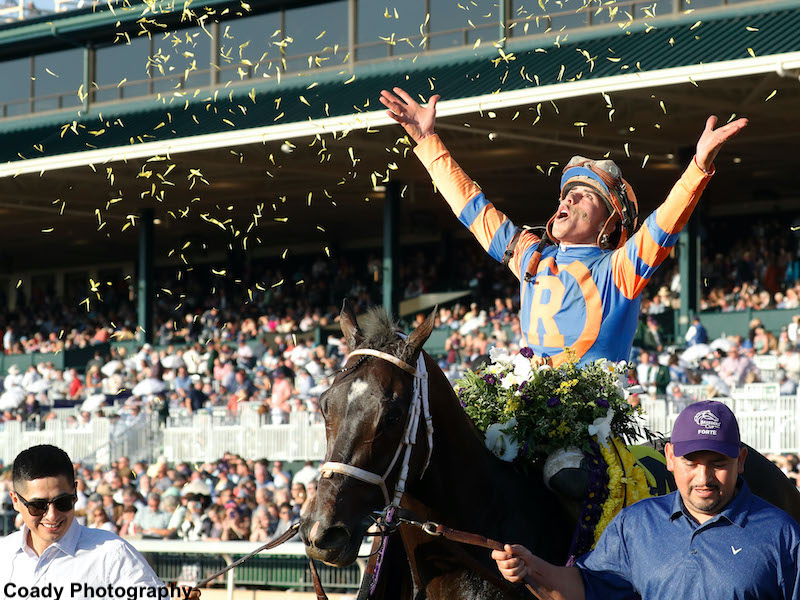