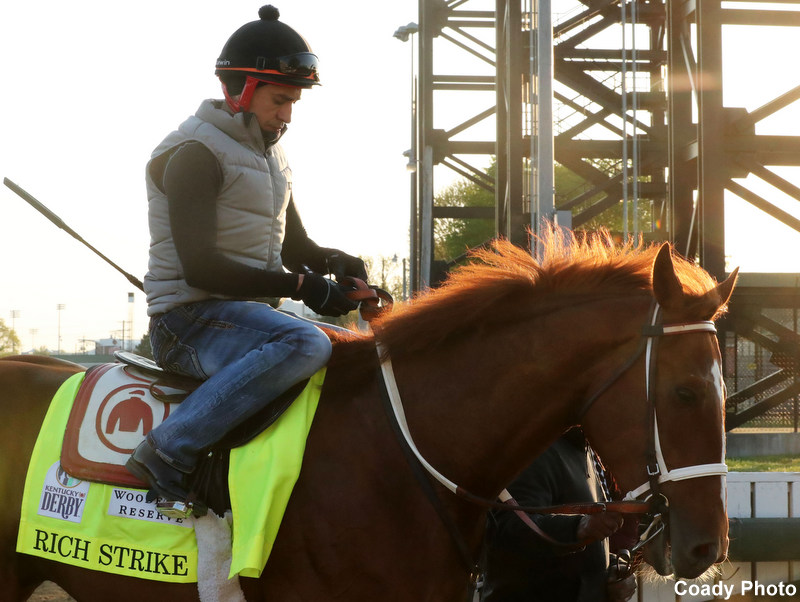 There is one important face you won't see in the winner's circle photographs from this year's Kentucky Derby. Perhaps one of the most vital parts of the team, Rich Strike's regular exercise rider Gabriel Lagunes watched the race from the clocker's tower on the Churchill Downs backstretch.

“I cried after he won,” Lagunes said. “Before the race, (trainer Eric Reed) asked me, 'Do you think this horse can win?' I said, 'If he gets in, I promise he runs first, second, or third.' I love this horse.”

It was a bold statement considering Rich Strike's 80-1 odds on toteboard, but Lagunes, also a professional jockey at smaller tracks across the Midwest, certainly wasn't wrong.

As much joy as that Kentucky Derby-winning moment must have held, however, it pales in comparison to the emotion that washes across Lagunes' face when he talks about the annual children's celebration he sponsors in his hometown of Veracruz, Mexico.

Located on the Gulf of Mexico, Veracruz is a hotbed for cartel violence and also has a significant portion of its population living in poverty. In 2020, according to datamexico.org, 35.7 percent of the population was in a situation of moderate poverty and 5.25 percent was in extreme poverty.

Lagunes' family was among the poorest. He had to step away from our interview to collect himself when he recalled that he and his brothers never received any toys on the biggest gift-giving holiday of the year, the Jan. 6 Día de Los Reyes celebration.

“Here, in the United States, it's Santa Claus,” Lagunes explained. “In Mexico, it's Santo Reyes. I would go to school, and everybody would have new toys, but my brothers and I had nothing.”

Lagunes goes above and beyond every year to ensure that no other children in Veracruz ever have to feel that way again. Every year, he sends toys for over 200 children and hosts a Three Kings Day celebration including piñatas, bags of sweets, inflatables, a bounce house, and ice cream.

The following video shows a few scenes from the celebration:

This man embodies the true spirit of giving; he doesn't underwrite the celebration because of his own excess, but because he knows what it feels like to have nothing.

Lagunes' mounts have averaged an average of roughly $1 million annually since 2014 (remember, jockeys keep 10 percent of that total, with a further percentage designated to an agent), and this past winter, with so many jockeys staying at Turfway Park for the winter, Lagunes took a salary exercise rider position in Reed's barn just to stay afloat.

Still, Lagunes used his own money to finance the January celebration this year so that no child went without.

He seemed surprised when asked about the charitable action, as if he didn't realize the news of the celebration had reached the United States.

“I buy for everybody,” he said, eyes watering and voice choking up with emotion. “I see the kids smile, and that's good for me.”

It's that level of virtuosity that has defined Lagunes throughout his career in the US, as well. It isn't often that trainers will talk about a jockey's work ethic or kind demeanor even after a loss, but Lagunes simply inspires that level of respect.

“He's got a heart of gold,” said trainer Tommy Drury, Jr. “He always tries his heart out and you always get 100 percent from him on your horse.”

Lagunes first rode Quarter Horse races in Mexico at the age of 12, progressed through the amateur ranks and would go on to win more than 3,000 professional races in Mexico. He moved to the United States in 2006 to continue pursuing a career with horses, and has now won 1,514 races here.

“I'm not smart, and I'm not well-educated, but I love horses and I love my job,” Lagunes said. “This is my life, horses. They don't ask for anything back.”

Reed recognized Lagunes' horsemanship from the first time he saw him ride at Delaware Park in 2007, and began riding Lagunes on his horses at Mountaineer Park about three years ago. When Lagunes approached him about a regular job over the winter at Turfway, Reed was quick to agree.

“He's a damn good horseman,” Reed said of the jockey. “He's got a good heart, but he's real smart about horses, too.”

From the first morning Lagunes was legged up on Rich Strike at Turfway, Reed knew he'd found the colt's perfect match.

“He taught the horse a whole lot, how to relax out there, but how to also gallop without getting so nervous,” Reed explained. “Richie likes to gallop fast, and most of the riders would try to slow him down and fight him, but Gabe realized that if you let him just have his head he won't ever go too fast. He's comfortable that way. That's when Richie really started getting good, once he could go out there and gallop the way the horse wanted, not the way the rider wanted.”

Lagunes added that Rich Strike can be a difficult horse to exercise in the mornings.

“The horse is not easy,” Lagunes said. “Before, he would play too much in the mouth, and so I knew I needed to let him loose. He didn't like anybody behind or too close to him, but now I know the horse.”

“They get along so well,” Reed echoed. “I decided that when the time came to start getting serious, to keep Gabe on him to help things progress. It's a big journey, and he's probably one of the most important parts.”

Lagunes drives to Churchill Downs every morning from his home in Florence, Ky. (about 1 ½ hours away), just to gallop Rich Strike. He'll travel with the team to Belmont Park ahead of the third jewel of the Triple Crown, missing out on potential afternoon mounts just to travel with the Kentucky Derby winner.

“Everybody I think understands what Gabe's doing and they're rooting for him,” Reed said.