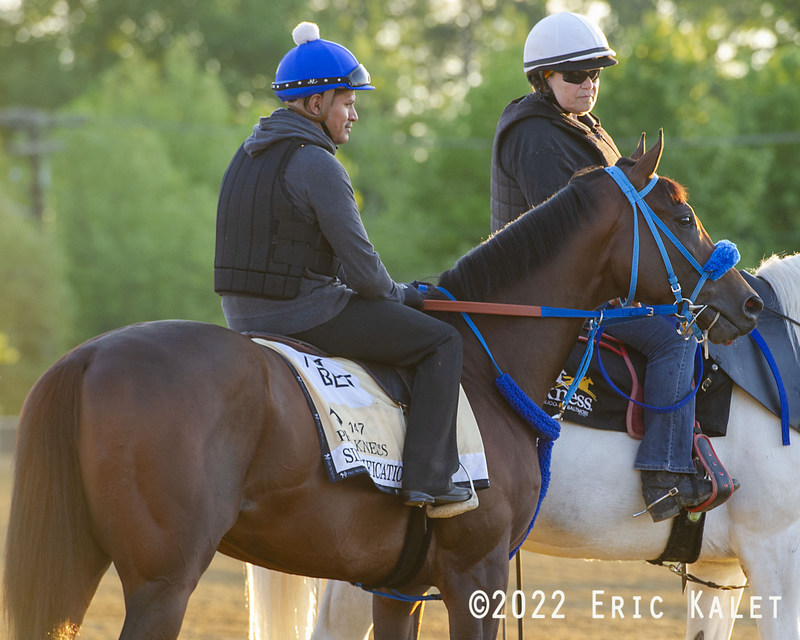 A few minutes into an interview about her Preakness Stakes (G1) runner Simplification, Tami Bobo noticed that the groom was having a problem. She quickly stepped toward the colt, grabbed his halter and helped settle him. A potentially difficult situation was averted.

Very few owners of Triple Crown series-caliber runners have the skills and experience that Bobo possesses. She has been working with horses for about 30 years – Arabians, Quarter Horses and now Thoroughbreds – and learned the business from the ground up. Through those decades she has climbed from young groom to successful professional horse trader to the co-owner of a horse that was fourth in the Kentucky Derby (G1) and now is a legit contender in the Preakness at Pimlico Race Course.

Bobo, 49, is the third generation of her family to work with horses – both of her parents were hotwalkers and grooms, and the first to sit in the owner's seats for two of the most prestigious races in the U.S.

“Yes, the American Dream,” she said, with a chuckle. “Anyone can do this.”

Bobo had to hustle to make a living as a teenage single mom and is an entrepreneurial success story. She and her husband, Fernando De Jesus, own and operate a flourishing pinhooking business – the buying and re-selling of young horses – in Ocala, Fla. At First Finds Farm, which they purchased in 2016, they have built a nursery to cultivate very young racing prospects. They buy up to 30 weanlings, horses born just months earlier, and prepare them for the yearling auctions the next calendar year. Bobo and De Jesus' hands-on business also acquires yearlings that can be pinhooked as 2-year-olds, have mares they breed and a racing stable of approximately 25 horses. The stable often contains young horses they could not sell at auction for the price they were seeking or chose not to sell.

Simplification is in the chose-not-to-sell category because he had a curable but untimely issue, sesamoiditis, that affects the ankles of young horses. It turned out to be a wise decision: Simplification has won three of eight starts, including the Fountain of Youth (G2) at Gulfstream Park, earned $665,350, and has taken Bobo, her family and co-owner Tristan De Meric to the Derby and the Preakness.

At the Derby, the Simplification team watched its bay colt, who was 35-1, rally from 15th to move into serious contention in the stretch. It looked like he might hit the board – a coveted top three finish in a Grade 1 race – but 80-1 long shot Rich Strike zipped past the leaders in deep stretch for the upset victory.

“Horse racing, there's absolutely nothing like it,” said Bobo. “There's no way to explain it. It's just unmeasurable excitement that you have. And it's an overwhelming feeling, You root nothing more than for all the horses to come out safe. But at the end of the day, when you see your horse making the move, it's just an unbelievable experience. I had my granddaughter there. She and I enjoyed that so much together, which makes it even more exciting for me.”

Bobo said they had to find a place for her 5-year-old granddaughter Brielle Hall to stand on see the horses.

“It's just unmeasurable. There's no way honestly, to explain the feeling,” she said. “When a horse wins a race and you were rooting that horse on and you have that vested interest in that animal, I don't know how to explain it. It's just an unexplainable experience. I would almost say at times when they're coming across the wire, it's an out-of-body experience. It's just, there's no price for it. There is no price for horse racing. I think it's just an unbelievable experience for people.”

Bobo's first Thoroughbred pinhooking venture in 2010 turned out to be a big success: Grade 1 winner Take Charge Indy, who raced in the Derby for Chuck and Maribeth Sandford. She has picked out and handled plenty of stakes winners since. Simplification, a son of Not This Time, failed to reach his reserve price at auction as a weanling in the fall of 2019 and ended up on the roster of young horses with Bobo and De Jesus. The plan to sell him was scrapped by the sesamoiditis, which Bobo describes growing pains in a racehorse.

“It's just part of it, and not anything significant that probably would have prevented a sale,” she said. “However, it would have prevented his ability to sell at his level. Not This Time was doing well at the time, but not nearly as well as they're doing now. So, it just didn't make sense. I wasn't in a position to have to sell the colt. We had lived with the colt. He was on the farm. We had worked with him. He's tough.”

By that, Bobo meant he is difficult to handle. She and her husband were drawn to is personality and grit.

“There was just something different about him,” she said. “There was something different that made us want to go on and see if maybe we were right. I'm certainly not a genius, None of us is, but at the end of the day, sometimes you just have to believe in these horses, especially when they show you something that sets them apart from the rest.”

All those years of experience nurturing young horses told them to hold on to Simplification.

Bobo said that some of the young horses are so intense, so willing to try hard, that their handlers have to be careful, to protect them from hurting themselves.

“This colt here was definitely one that was just one you had to really pay attention to,” she said. “He was just tough. So tough in a way that made him the horse he is today. He channeled it.”

In 2021, Simplification was ready for the track and was sent to the barn of trainer Antonio Sano, the Venezuelan star who has become a top trainer in South Florida.

“Antonio was singing his praises early on,” Bobo said. “When he first had received the colt, probably like 30 days after, he was calling and saying, 'This is a different kind of horse. This horse is incredible.'”

Yet, Simplification bombed in his debut, finishing fifth in a sprint over the Tapeta synthetic surface at Gulfstream Park. Three weeks later, he broke his maiden by 16 ¾ lengths on the main track. After a third in an allowance race, he won the Mucho Macho Man stakes on Jan. 1. Next, he was second in the Holy Bull (G3), won the Fountain of Youth and was third as the 2-1 favorite in the Florida Derby (G1).

That high-level success has produced interest in Simplification from would-be buyers but his owners have kept him.

“Yes, there's been offers on this colt,” Bobo said. “With this particular horse, they all want that Grade 1. They all want that big win, especially for a stallion, and maybe we'll get it going forward. If that's in the cards for us to have, and God willing, I know that'll be the plan. I believe everything happens for a reason. And the ride and the journey with this horse has been unbelievable. For me, I just think it's a blessing to have him and if the right opportunity presented itself, at the end of the day, it's business. I pinhook. I buy and sell horses for a living. This is what we do and I do a lot of real estate.

“I believe that there's a price for him. It just depends on when it comes and who it's with,” she added. “At this point, we have a residual value in him probably as a stallion. So, going forward, it'll be hopefully something along those lines.”

Business aside, Bobo, the former groom whose parents and toiled on the backstretches of tracks, is relishing this ride in the Triple Crown with her family and friends.

“I do race quite a bit,” she said, “but this is an experience, to have a horse of this caliber, and consistently show up the way this horse has shown up and take the training that he's taken and just really stand up and show you that he's just a different animal. To have that opportunity to be able to go along with this colt and believe in him the whole way, to go on with him, it's just amazing.”