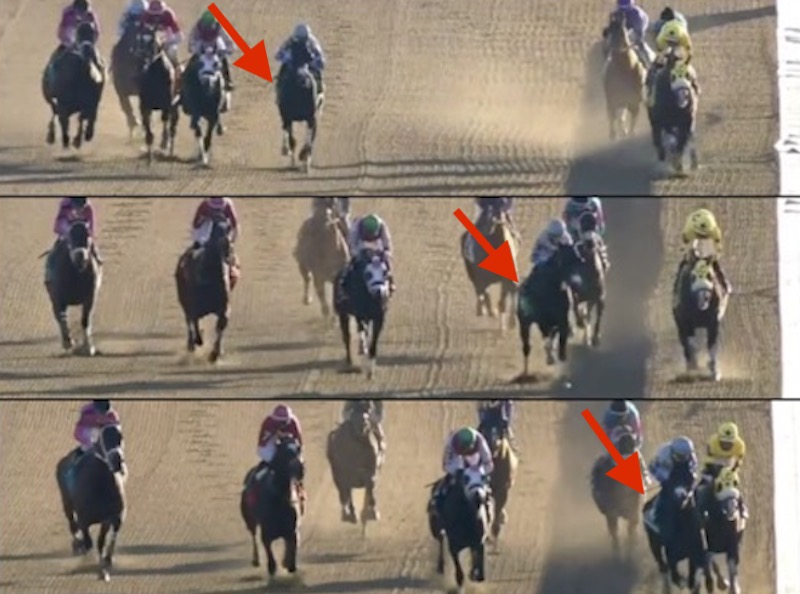 Ten years from now, when Irad Ortiz Jr. is inducted into the National Museum of Racing Hall of Fame in Saratoga Springs, N.Y., his ride aboard Gran Casique in Friday's eighth race at Aqueduct will not make the highlight reel.

As the Equibase chartcaller put it, “Gran Casique angled in with reckless abandon at the five-eighths and bumped Ragtime Blues hard which caused that foe to lose his rider…”

The victim of Ortiz's reckless act, the aforementioned Ragtime Blues, was ridden by Omar Hernandez Moreno, a seven-pound apprentice jockey who began his career racing in New York in May against the country's deepest jockey colony and has recorded five wins from 106 career starts.

But it was Ortiz – despite his 3,047 wins from 15,575 career starts and three Eclipse Awards as outstanding jockey – who looked like a rookie rider in the 6 ½-furlong sprint. Ortiz put Hernandez Moreno and the other riders in danger with a completely unnecessary move to the rail in the opening furlongs of the race. Fortunately, Hernandez Moreno was not injured and outriders caught the riderless Ragtime Blues. Gran Casique finished second and was subsequently disqualified and placed last.

Stewards at New York Racing Association tracks appear to be either uninterested or incapable of controlling the actions of that circuit's jockey colony. There have been countless examples of “herding” that exceed strategic race riding and have gone unpunished. This is about New York, but the same can be said of stewards at other tracks around the country. Too much careless or reckless riding is being permitted.

The actions by Ortiz will be a litmus test for the stewards.

In 1942, future Hall of Famer Eddie Arcaro was aboard a horse named Occupation in the Cowdin Stakes at Aqueduct and engaged in a confrontation with fellow rider Vincent Nodarse aboard Breezing Home. Arcaro felt Nodarse had cut him off at the start and spent the rest of the race trying to retaliate. There was a series of bumps, with Arcaro trying to knock Nodarse off his horse, a move that landed him in a hearing with the stewards.

When confronted by them about what he had been trying to do, an unfiltered Arcaro responded, “I was trying to kill the S.O.B.” He was given an indefinite suspension.

The time away from the racetrack was a struggle for Arcaro, who worked as an exercise rider in Aiken, S.C., galloping horses for Mrs. Payne Whitney's Greentree Stable to make ends meet for his growing family. After Arcaro was away from the track for nearly a year, Whitney wrote a letter to William Woodward Sr., chairman of The Jockey Club that ran the New York tracks at the time. Whitney pleaded with Woodward to let Arcaro ride again.

“He let me and it changed my whole life,” Arcaro would later tell Sports Illustrated's William Leggett. “It made me obey the rules, and it made me realize what being nice to people means.”

I'm not suggesting Ortiz made a purposeful move to cut off Ragtime Blues and eject Hernandez Moreno from the saddle. I am saying that it's time for the stewards to try and curtail such reckless riding in the future by giving Ortiz a suspension that is immediate and lengthy enough to give him time to think about how his actions can endanger his fellow riders and the horses they are aboard.

Because of designated race rules and the appeals process, jockey suspensions, in New York and elsewhere, have become a joke. There was nothing funny about this future Hall of Famer's ride at Aqueduct, one that could have had serious consequences. New York stewards must act accordingly.